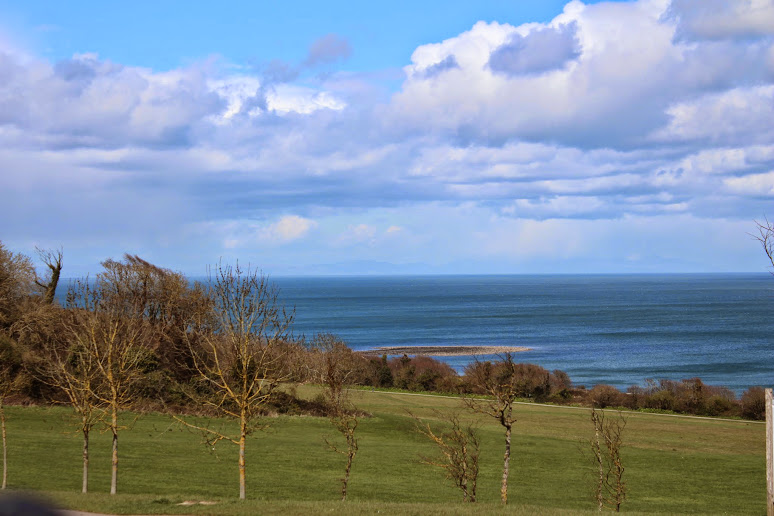 So…Skerries Ireland. Haven’t heard of it? Neither had I. We were looking for one more place to visit before flying back to Italy, read about the Skerries Windmills, and decided that was as good a place as any. Skerries is a seaside village just outside of Dublin. We had a rental car and drove it in about half an hour, but I have heard it’s quite easy to get public transportation from Dublin to the Skerries station.

Things to do in Skerries Ireland

Skerries Mills.
After a week in Ireland, this was one of our favorite attractions. Traveling with two very small kids, we were constantly in search of spots that were appealing to adults but kid-friendly. I thought this was an iffy pick; turns out it was perfect. Although I didn’t see any signs of active flour milling, the self-guided tour (€12 for a family) allows you to see the fully-functional mill. Once we made it through the various rooms in the millhouse, the reception person came through and turned on the wheel, allowing us to re-visit the mill’s rooms to see everything in action. Once exiting the mill, visitors are allowed to walk the fields to see the small and large windmills.

After freezing outdoors, it was a real treat to come back to the millhouse for warm drinks at the Watermill Cafe. Although we only chose a pot of tea for ourselves and hot cocoa for our 6-year-old, the cafe served really delicious-looking scones, pastries, and sandwiches. And they do have a liquor license, so Irish coffees are ready to go in seconds.

Especially with a small market outside, there were plenty of opportunities to shop at Skerries Mills. The gift shop had oodles of made-in-Ireland items like pottery, woolens, jewelry, and flour (duh…it’s a flour mill). The market in the courtyard seems to be new. There were very few vendors that Saturday morning but I have a feeling it’s growing based upon the fact that their ramping up their social media efforts.

I love a good castle in ruins. My kids, however, prefer the fully-restored variety. For this reason, we figured Ardgillan Castle was a good bet. As it turned out, they weren’t giving tours of the actual castle that day. We still managed to make the best out of the visit. The tea room is the spot where the tours begin. Since it was lunchtime and tours were out, we decided to grab lunch there. The sitting-rooms-turned-dining-rooms were pretty. The period decor was busy enough to keep the kids entertained–nothing was drab or boring. They had highchairs, too, which was a major bonus. Sans tour, we headed back out to see the grounds. Early spring is probably not the best time to view the walled gardens. There were plenty of blooming flowerbeds but the gardens appeared to be geared toward mid-summer-bloomers. The view of the sea was breathtaking. Perhaps the real winner here, though, was the huge play area. The playground was divided into an area for little ones and an area for big kids. It was perfect for letting the kids run out some energy.

The biggest “bust” of the day was our Bed & Breakfast. Despite its great reviews, it was terrible. The bedroom looked clean enough but the rest of the house was nasty. It was so bad, we paid half a night’s stay to get out of there and booked a room at Maldron Dublin Airport. Maldron was a little overpriced but it’s a 5 minute shuttle to Terminal 2 at the airport. Most importantly, the Maldron was clean.

As a whole, I wouldn’t skip someplace like the Cliffs of Moher or Rock of Cashel for Skerries, but if time permits and you have little ones, Skerries might be worth your time. Especially in the summer months when sea breezes don’t lead to frigid windchills, you could easily spend the day beachcombing.

If you’re traveling to Ireland–especially if you are traveling with kids–check back in the coming days. I will have some other can’t-miss attractions, places, and pubs to discuss. Visit me over on my Facebook page if you have questions or just feel like discussing Skerries Ireland.